Buck plus Harrison Ford- What else is necessary? 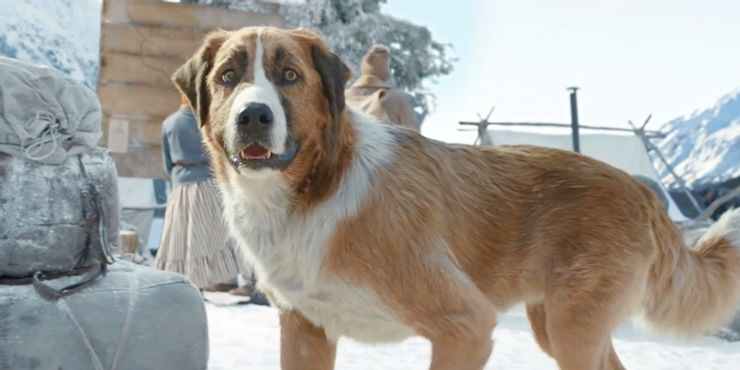 Remember Jack London’s The Call of the Wild?

Most of us read it in junior high or somewhere around there. And many of us can recall vividly the tears evoked by London’s lyrically, evocative prose from his 1903 novel, The Call of the Wild:


“With the aurora borealis flaming coldly overhead, or the stars leaping in the frost dance, and the land numb and frozen under its pall of snow, this song of the huskies might have been the defiance of life, only it was pitched in minor key, with long-drawn wailings and half-sobs, and was more the pleading of life, the articulate travail of existence. It was an old song, old as the breed itself—one of the first songs of the younger world in a day when songs were sad. It was invested with the woe of unnumbered generations, this plaint by which Buck was so strangely stirred. When he moaned and sobbed, it was with the pain of living that was of old the pain of his wild fathers, and the fear and mystery of the cold and dark that was to them fear and mystery.”

The Call of the Wild

When I saw the previews

to the new release of the film, The Call of the Wild,

my first thought was something like, “Buck plus Harrison Ford-what else is necessary?”

It has been too many years since I read it for me to remember anything but the emotions galvanized by London’s powerfully written adventure story. Just like most dog lovers, the image of Buck in the previews was more that sufficient to whisper to my husband, “I have to see this movie!” The day after it opened, we did so.

I loved it. From the first scenes of Buck’s crazy jaunts through the house of his wealthy owner, stolen treasures from the banquet table, Buck does nothing but captivate and delight. But the delight does not obscure what we know is coming for the innocent and oblivious Buck.

By the time Thornton appears to rescue Buck, I had been sitting at the edge of my seat for close to an hour waiting,
“John Thornton stood over Buck, struggling to control himself, too convulsed with rage to speak. “If you strike that dog again, I’ll kill you,” he at last managed to say in a choking voice.” And had to work hard to keep my exultation to myself.

Although wondering how they were able to train a dog

to behave that way, not once did I dream that Buck was animated- computer generated. Only upon searching about Buck to write this piece, I confess that I was more than a little disappointed upon learning that fact.

I have only scanned the reviews-just enough to read that reviewers picked up the computer animation immediately. And disliked the film because of it.

My advice? See it anyway. Buck is based on a rescue dog named Buckley. Because he so perfectly fit Jack London’s description of Buck in the novel, the director’s wife drove to Kansas to rescue him after filming had begun- we see Buckley some of the static scenes. That’s more than enough reason to forgive the computer animation, right?

The role of the damaged human protagonist, John Thornton was made for Harrison Ford. His narration frames London’s exquisite and timeless prose in his gravelly cadence:


“There is an ecstasy that marks the summit of life, and beyond which life cannot rise. And such is the paradox of living, this ecstasy comes when one is most alive, and it comes as a complete forgetfulness that one is alive. This ecstasy, this forgetfulness of living, comes to the artist, caught up and out of himself in a sheet of flame; it comes to the soldier, war-mad on a stricken field and refusing quarter; and it came to Buck, leading the pack, sounding the old wolf-cry, straining after the food that was alive and that fled swiftly before him through the moonlight. He was sounding the deeps of his nature, and of the parts of his nature that were deeper than he, going back into the womb of Time. He was mastered by the sheer surging of life, the tidal wave of being, the perfect joy of each separate muscle, joint, and sinew in that it was everything that was not death, that it was aglow and rampant, expressing itself in movement, flying exultantly under the stars and over the face of dead matter that did not move.”

Call of the Wild