Only Those Who Obey Can Believe-The Cost of Discipleship 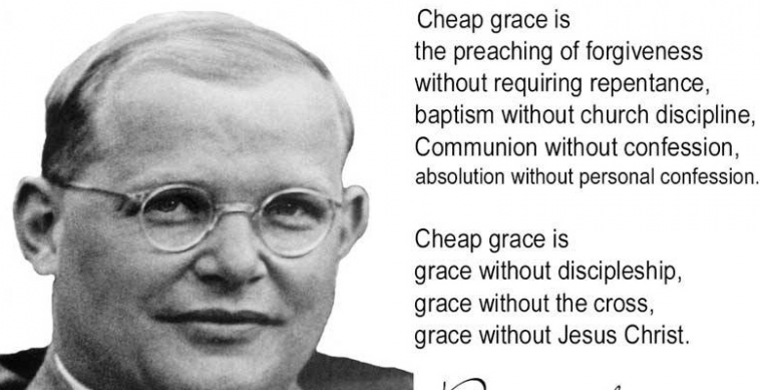 Only those who obey can believe.

After completing Eric Metaxas’ splendid biography of the German founder of the German Confessing Church, Spy and Martyr, Bonhoeffer, I needed to understand more about this man who understood Christianity in a way that few of us do. To do so, I bought and read Bonheffer’s, book, The Cost of Discipleship.

Since writing almost always helps me better understand complicated questions-like these of faith- I wrote an article called Cheap Grace vs Costly Grace several years ago. And thought I had understood this brief, dense book which was written during the shockingly few years that it took Hitler and his cabal to wholly dominate the the land of Luther. Even forcing the German Protestant Church to accept his doctrine of Aryan supremacy and tacitly agree to his crazed extinction of German Jews.

But only in reading Dietrich Bonhoeffer’s The Cost of  Discipleship for a third time am I getting even close to comprehending it. The book is a meditation on the two thousand years of human existence since the incarnation of Christ. It is timeless and universal…a warning for all who dare to call ourselves Christian. What looks to be sudden, shocking and uniquely German evil emanates from all of our hearts. Our conversion must consist first of obedience. Just like the apostles, the implicit message in all of Christ’s parables; it is clear that only those who obey can believe.

Cheap vs Costly Grace- The Cost of Discipleship

According to Bonhoeffer, the Roman church’s response to the cultural waxing and waning of faith was monasticism. At least, there were men (and women) who possessed the fortitude to live according to authentic Christianity. But Luther wanted that costly grace found in the monasteries to flow over the world, therefore he walked away. And from then on, was grossly misunderstood by those who came after him. The whole of Luther’s infamous distinction between faith and works was lost, trivialized into believing that speaking a few words, attending Sunday services would transform and justify.

Strangely, I have never before thought of faith as something which ebbed and flowed.  But clearly Luther and Bonhoeffer did:

As Christianity spread, and the Church became more secularized, this realization of the costliness of grace gradually faded. The world was Christianized, and grace became its common property.

When I first read of the Israelites story of returning and leaving their God through the millenia, I considered these ‘phases’ as specific to the Jews. But now, reading Bonhoeffer and his interpretation of Martin Luther, I see it all very differently. These ancient stories are mirrors.

This love story between God and humanity is replete with disorder, betrayal and confusion- all of which are flourishing in our politics and in our churches.

Remember Raiders of the Lost Ark and Harrison’s Ford’s Leap Across the Chasm?

Making use of well-known Gospel stories like the first apostles, the rich man, and the good Samaritan, Bonhoeffer carefully explains the two- stepped process of conversion:

Thinking back to moments of my own past…

I can see this meeting as vividly as if it were yesterday. I was the Hospital Director at a prestigious academic medical center and had recently converted to Catholic Christianity. Bill H., a third year medical student sat in my office and explained that the monk who had spent much of the previous summer readying me to join the Catholic Church was his friend and had told him about me and my surprising conversion to the Catholic faith. Bill explained that Dr. Bernard Nathanson was coming to the medical school campus to lead a panel discussion to expose the lies and the truths about abortion.Would I attend? He had told his fellow med students about me, it would mean a lot to his committee if the Hospital Director were to come in support of them.

All these years later, I can feel the ice that coiled around my gut during that meeting…the knowledge that I could not refuse this request. I, who had been a vocal and financial supporter of Planned Parenthood. I who had my own very personal experience with the reality of ‘choice’…now must stand up. Proclaim what I knew to be the truth of God’s commandments. And I was terrified.

That remarkable scene in Raiders of the Lost Ark depicts these moments perfectly. Harrison Ford’s father is dying…he can stop it. But to do so, Ford must jump into thin air across a chasm. Only when he is in the air does the bridge appear. Only those who obey can believe.