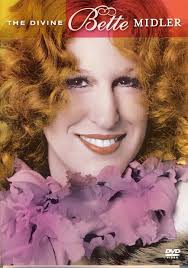 “I think most of us are settling for Bette Midler’s God.”

It was a terrific headline. Hardly what anyone expects a priest to say when starting his homily on a Bible passage. The priest smiled at the cognitive dissonance apparent in the expressions of each of us seated in front of him at Thursday’s daily Mass. He’d gotten the reaction he wanted.

Although none of us said it out loud, there was a collective “Huh?”

The reading for Thursday’s Mass was from the Book of Exodus. A long reading. Moses has just heard the voice from the bush which burns but is not consumed. Moses asks,

God spoke further to Moses, Thus shall you say to the children of Israel: The Lord, the God of your fathers, the God of Abraham, the God of Isaac, the God of Jacob has sent me to you.

“This is my name forever; this is my title for all generations.

I am confident that I was not the only one wondering, “How on earth is the priest going to connect this Exodus reading to ‘Bette Midler’s God’?”

And maybe also trying to recall just which Bette Midler song that Father Chris was talking about. Our minds busily trying to capture one of her more famous songs, and what she’d sung about God, a little surprised that she had. Certainly mine was digging into my memory banks but coming up blank.

Without explaining his metaphor, the newly ordained priest repeats the rest of what the Lord told Moses during that first lengthy conversation:

Go and assemble the elders of Israel, and tell them: The Lord, the God of your fathers, The God of Abraham, Isaac and Jacob has appeared to me and said: I am concerned [bolding mine] about you and the way you are being treated in Egypt; so I have decided to lead you up out of the misery of Egypt into the land of the Canaanites…

Once I was able to surf the internet and find a list of Bette Midler’s songs, From a Distance jumped out at me. That’s the one he must have been talking about. But to make sure, I looked for the lyrics. Yes, this is the one the priest was referring to as Bette Midler’s God.

From A Distance begins this way: The melody returns as you read the lyrics, right?

The specific passage that the priest referred to is this one:

Which is our God?

The God who is so concerned about us that He tells us not to fear more than two hundred times in the Bible, that He will be with us until the end of time? The God we must circumcise our hearts to get to know?

Or shall we settle for Bette Midler’s God? And lie to ourselves that he does not hear our prayers when He answers them in a way we don’t want?