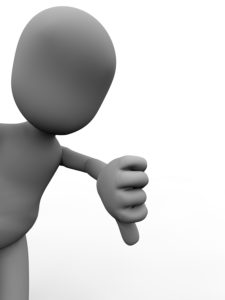 Human figure with a negative gesture to signal disagreement Despite the bad reviews

Despite the bad reviews, the 15:17 to Paris is worth your time. Before you head out to see it however, you should know the reviewers were right in more than a few of their critical comments.

So why am I writing that you should see a movie despite the bad reviews? The justifiably bad reviews? Because there is something more at play here. A reality behind what we watch as we view Eastwood’s film. One well worth our time, consideration and outside of our politics.

Here are the three reasons I recommend this film:  Easily overlooked if we accept all the criticism at face value.

Three young men wrote a book about the real events on a train while on vacation in Europe. Then they shopped it around in Hollywood. Clint Eastwood bought it.

Talk about thinking big! Although I’ve written four novels, I’ve not had neither the audacity nor the tenacity to undertake shopping any of them around in Hollywood.

Isn’t that an overstatement? At least exaggeration?

No. I think not. Consider the kinds of movies Hollywood credits as its best. Manchester By the Sea jumps to mind. The reviews were, almost without exception, splendid. Despite a story about brokenness, addiction and depression, unrelentingly dark. One that celebrates sexually aggressive young girls eager for sexual intercourse with a fifteen- year- old boy…as if this be expected behavior. And a protagonist who emotes nothing at all- reminiscent of a hollow man- with a writer of the screenplay who is lauded for his “mastery of the quotidian absurd.” No joke.

I remember working diligently to understand the ‘theater of the absurd’ while a young and naive undergraduate English major. Sartre, Ionesco, Camus, Roth, Updike, all revered by the literary elan.  When I finally realized the banal and boring simplicity of their message: Fundamentally, there is no meaning, no truth, no absolutes, I stopped reading the stuff.

Tragically, that nihilistic illusion  has claimed much of our art, films and literature- and our politics.

2. How does Eastwood’s film oppose values of the powerful in just about every way?

I have not read the book, The 15:17 to Paris but the movie is told mostly through the eyes of Spencer. As a kid, Spencer is fat, has crummy grades, being raised by a single mother and loves guns and everything military- in a word, a loser.

In that intriguing episode between Spencer’s and Anthony’s mother where the teacher confidently recites statistics predicting only disaster for boys with ADHD if they were not instantly prescribed medication. Worse for the sons of single mothers.  It’s almost impossible to miss Eastwood’s own wallop back at the Illuminati who remain blissfully aware of the horrendous consequences of blind reliance on drugs instead of self-control and discipline.

It’s almost funny, when both mothers refuse the ADHD drugs for the two teens and Spencer’s mother shouts, “My God is more powerful than your drugs!” as she and her friend leave the teacher’s office. But our smiles fade if we think about what we just saw.

3. Eastwood thwacks the prevailing overlay of fear, passivity, and nihilism embraced by many of our so-called artists and leaders.

The movie moves back and forth between these boys as kids and adults. Kids with the problems expected just by being a kid. When Spencer’s mother hits the wall with her frustration and disappointment in her son, she slams shut the door to his bedroom as she stalks out.

Does Spencer erupt in vile language?

Or decide to show her what kind of trouble he can cause or engage in any of the other narcissistic behavior one would expect?

Nope, this teen-aged boy gets on his knees beside his bed to pray the St. Francis prayer!

O divine master grant that I may
not so much seek to be consoled as to console
to be understood as to understand
To be loved as to love
For it is in giving that we receive
it is in pardoning that we are pardoned
And it is in dying that we are born to eternal Life.

Spencer’s failed attempts to meet the Air Force requirements are almost embarrassing to watch. But the guy does not quit. Instead, he embodies the virtues of another age: Persistence, endurance, self-control, faith, in the secure conviction that his life has meaning. And when faced with the horror of death, somehow this guy summons the courage to race toward it. Just an ordinary guy, on a vacation, hungover from partying too hard the night before…

Most men lead lives of quiet desperation. Henry Thoreau wrote those words almost 300 years ago in a culture very different from ours. But the people then and now are the same. Each one of us chooses, moment by moment, decade by decade, life by life, whether to join the desperate masses or refuse.

Kudos to Clint Eastwood for his stouthearted choice to risk the bad reviews. Surely he foresaw what would be said about a movie that: