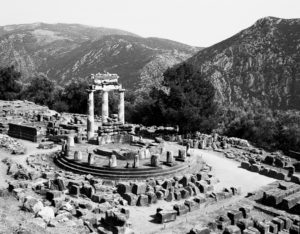 The ruins of the Sanctuary of Athena Pronaia at Delphi in Greece as seen from above. ** Note: Slight graininess, best at smaller sizes I, Claudia. For the last six weeks or so, I have been immersed in ancient Greece, Rome and Israel as I work to get a feel for Claudia- that insubstantial shadow behind a 2000-year-old curtain- and her infamous husband, Pontius Pilate. After reading four or five novels about this woman, I told a friend yesterday, “I know who she’s not.”

A rather inauspicious start?

Most of the I, Claudia books have been sitting in a pile since last March- when I became aware that the next book would not be the fifth in the Lindsey McCall medical mystery series, after all. And  would be a whole new endeavor: new ‘genre’ (historical fiction), one that implies a retinue of new skills. I dislike that word, genre, ever since I learned what it meant when starting this new writing fiction gig. One would think, now ten years later, that the distaste would fade, but it hasn’t. If anything, it has amplified. It feels elitist-fake, as if I’ve adopted someone else’s style of dressing, or speaking.

Maybe that’s so because once again, I’m breaking the rules. Most fiction writers stick within their original genre or category of writing for very good reasons. Lindsey McCall and her clan are getting some traction on line- when searching for key words related to the series, the search engines list my books withing the first three pages of an on line search. That’s a very good thing because getting noticed is the first step to sales. For most of us, that takes time, money and patience.

Then why do it? Make the switch?

Great question, thank you for asking.

I, Claudia showed up in my head. Just like The Fragrance Shed By a Violet did. So, there was no choice but to do it. Strangely, after close to three months of some writing and mostly research, I’ve learned this isn’t all that different from writing the Lindsey series. Although these are real people, historical persons who lived in specific places in time, the writing feels the same. In the end, history is merely his_story (or her_) story.

Me, too. But here’s the thing. Now that I know who Claudia is not, I am beginning to see who she is. Exactly what is happening with her husband, Pontius Pilate. For whom I have long felt a sympathy, even a tenderness. Maybe that is why they have showed up.

As always, thank you for reading my thoughts. Writing them down helps me far more than you can know.