Coping With Lessons We Never Want To Learn 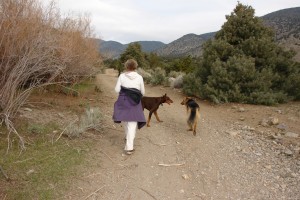 And this is the 4th post I have written in my attempts to come to grips with the loss of this remarkable creature with whom I was graced for a little over 7 years. Over 3000 words before I felt that the tribute had been written. Coping with lessons we never want to learn.

As I write about what I have learned, I think of one of my many teachers, CS Lewis, when he talked about experience.

‘But we learn, by the awful grace of God, we learn,’

because that’s what grief is like: Awful..as in full of awe. None of us can escape it; the fact that our current medicalized culture considers grief as something for which to take one of the dismaying numbers of available chemicals to palliate the work of grief is horrific and abhorrent to me.

Over the last several weeks, I have thought grimly of the results of the years of research done by Elizabeth Kubler-Ross in the 1970’s about the five stages of grief she observed in the large numbers of dying patients she interviewed. I went through each of them; sometimes for long periods, sometimes for only minutes but I did not escape one stage she witnessed in her work with the dying: denial and isolation, anger, bargaining, depression and finally, acceptance.

The horror I feel for the increasing universal chemical palliation of grief is due to the fact that the lessons with which I have recently been gifted are denied those who choose chemical anesthesia. Without enduring the awfulness of the feelings, there is no possibility of achieving the serenity of acceptance…of the certainty that all of this matters.

As a writer, my primary method of coping with what I do not understand is to write about it.

There are a wide variety of valid measures of coping with stress and anxiety which work great and that I practice on a regular basis: exercise, prayer and meditation, work, distraction via reading, movies and traveling.

But this grief flattened me. I could do nothing.

All I could do was to cry- sometimes, at the most inopportune times, the most embarrassing of times. But I could not control the tears for I was out   of   control.

Like most 21st century Americans, the feeling of being out of control is worse than unpleasant. Most of the time, perhaps like you, the more out of control I feel, the more frenetic and futile are my behaviors.

Intellectually, I knew that I was not crying for just the loss of Ally but for all of those I have experienced because they accumulate, don’t they? We carry them around with us because we’re simply too afraid to stop because we’re afraid we’ll be flattened and won’t be able to get up again.

But that’s a lie.

That final stage Kubler-Ross calls acceptance- a word I used to hate- does signify all that the word implies: we need to say good-bye and there is no remedy nor recourse but that. But our ability to say the words cannot come without each of the previous phases-the sense of feeling that no one…no living soul on this planet understands how awful I feel, how nauseated, followed closely by rage at the fact that others close to us are eating, laughing, joyous. And then the silliness of ‘if only I’d done this, or that’ followed closely by depression because we did not, could not, do whatever it was we imagine could have changed the outcome.

When we emerge, finally, we know we are different..altered in way that cannot be easily articulated: we have come to accept the unacceptable and to understand what cannot be understood.