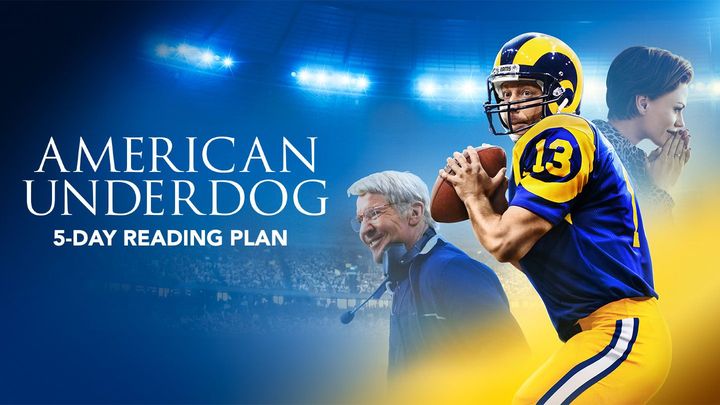 Before I get to my subject of football as metaphor: American Underdog, some background about football and me may be useful- especially if football isn’t comprehensible to you. So, if you’ll permit a rollback in time, the following is excerpted from an article called 9 Lessons Tom Brady has taught me:

“It was late September 30, 2001, and my new husband insisted I watch the Playoffs between his beloved Patriots and Oakland. We were living in Connecticut, cold, snowy Connecticut. I’d decided to leave my career in academic medicine where I’d built a national reputation and join my husband in an online business about which I knew nothing. About sales. Or marketing. Or excel spreadsheets.

You know that stress scale? Where a move and loss of a job is about the highest? Add a new marriage and new faith to those two and there is most likely no measurement for the strain I had myself under…

My husband knew I didn’t like football and seemed to have no problem with it. Until the night of that game. When he insisted I stop working and come upstairs to watch Tom Brady’s first Playoff game. Now known as the ‘Tuck Rule’ game, the Patriots had no chance against Oakland. They were outmatched and had no chance of winning, a Patriots Super Bowl win was a pipe dream.

As I reluctantly climbed the stairs, watching the television as I did so, the camera happened to capture an expression on the twenty-three-year-old quarterback’s face. Mesmerized, I stopped and stared. At what was one of the more profound depictions of grit  that I’d ever seen. The intensity, determination, and sheer will screamed out of the screen at me.

And I was hooked. Football was nothing like what I’d thought. Always I’d dismissed the game as exactly what it appears to the uninitiated: Chaotic pushing, scrambling, and mindless mayhem.

It was a mind game.

Just like everything I had done before, a matter of digging down deep and refusing to be bowled over. A matter of wholly changing the way reality is perceived. This, I got, I lived here, exactly what my new faith demanded of me, like everything that had come before.

What have I learned from Brady?

Now you understand why I could not wait to see American Underdog.

A Christian film produced and directed by the Erwin Brothers, the story line is based on Warner’s book, All Things Possible. If you rely on secular reviewers to make your movie decisions, please don’t for this one. The NY Times calls it a “football fairy tale,” and the LA Times says it’s “too simplistic.” Whatever that means. Don’t believe them. Immerse yourself in the remarkable story of a guy with a hunger to be an NFL quarterback. And the raw honesty with which he tells his story.

Kurt Warner presents himself as self-effacing: a simple guy with a passion for football. Not just a love but a passion for the game. But the obstacles that he confronted were overwhelming. For instance, Warner attended one of the lower ranking colleges, hence the NFL scouts overlooked him. Upon realizing that no team was about to draft him and he needed money, Warner took a job stacking shelves in the local grocery store. Finally, desperately, Warner humbly accepts the invitation by Coach Jim Foster-brilliantly played by Bruce McGill- to be the Iowa Barnstormers quarterback in Foster’s Arena Football League.

There’s more, a whole lot more and I write this piece because this movie isn’t really about football. Instead, it’s a metaphor for life, yours and mine. Or, perhaps more accurately, it’s a metaphor for anyone pursuing a dream. Eschewing all those voices whispering, “Stay safe.” “Don’t take the risk”… Regardless of age.

It’s not a story about about self-promotion: “How great I am as told by Kurt Warner.” Instead, it’s raw and real. Warner fixates on football, it’s everything to him. So much so that everything else takes last place. Some of the more unbelievable scenes, like running out of gas and walking miles to get it in a freezing snow storm may be fodder for skeptics but the Warners attest to the truth underlying this and the entire tale.

His mentors- coaches- are beautifully depicted,

and may remind you of the people God placed in your life along the way of your life. The actors playing the coaches instrumental in Warner’s life: Jim Foster, Coach Allen and Jim Vermell are believable, their dialogue and delivery, excellent.

However, my favorite of the coaches?

Destiny. It belongs to the underdogs. You wanna prove that together?

There’s something special in you, son.

If you decide to see the film, you’ll understand why the Erwin Brothers decided to release it during the Christmas season of 2021.

Though unaided reason is ignorant of His presence, God has never been indifferent to the plight of even the least of His creatures. He is always at work on their behalf. That is why we find Him throughout the Scriptures searching in the world’s silences and poverties as a shepherd seeks out lost sheep in a wilderness or a father his lost son.

Anthony Liles- The Word and Silence

The celebration that connotes events that are marked by history: the birth of Jesus, the long journey of the wise men and the Baptism of the Christ and ends the Christmas season of the Christian liturgy. No longer is our journey geographical, instead it is inward. Nor is it a one-time search, but rather day to day, even, at times, moment to moment.

Who were the wise men?

St. Paul writes of what must have driven those long ago travelers: Faith.

Before faith came, we were held in custody under law, confined for the faith that was to be revealed. Consequently, the law was our disciplinarian for Christ, that we might be justified by faith. But now that faith has come, we are no longer under a disciplinarian. For through faith you are all children of God in Christ Jesus. For all of you who were baptized into Christ have clothed yourselves with Christ. There is neither Jew nor Greek, there is neither slave nor free person, there is not male and female; for you are all one in Christ Jesus. And if you belong to Christ, then you are Abraham’s descendant, heirs according to the promise.