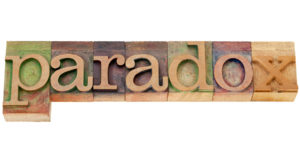 In the physics of spirituality, it’s all paradox. St. Thomas Aquinas put down his pen, never to pick it up again, after four-thousand pages of his great work the Summa Theologica. He had reached question 99 when he quit. And when asked why, replied, “…‘All that I have written seems like so much straw compared to what I have seen and what has been revealed to me.”

Yes. By its very nature, a word limits and bounds a thing. Never can it perfectly match the reality of it, no matter how well crafted the prose. And when the ‘thing’ we are describing is God, it feels like sheer arrogance to even attempt. And yet, the beloved prophet John writes of Him as Logos, Word.

Of course, Logos meant more than word to Greek philosophers. When Heraclitus first conceived of the concept, he used the term to signify far more than a lexicon when he wrote mystical statements like this: Listening not to me but to the logos it is wise to agree that all things are one.

Today’s Gospel is like that. I can sympathize with Simon the Pharisee when the woman known to be of ill repute enters his house during a dinner he is hosting for this most curious Rabbi. Reading the heart of his host as Simon thinks, “If this man were a prophet, he would know who and what sort of woman this is who is touching him, that she is a sinner.”, Jesus asks him a question.

“Simon, I have something to say to you.”
“Tell me, teacher,” he said.
“Two people were in debt to a certain creditor;
one owed five hundred days’ wages and the other owed fifty.
Since they were unable to repay the debt, he forgave it for both.
Which of them will love him more?”
Simon said in reply,
“The one, I suppose, whose larger debt was forgiven.”
He said to him, “You have judged rightly.”

And then the Lord proceeds to criticize Simon for not bathing his feet, kissing him or anointing his head with oil. But this unknown woman, most likely a prostitute who had learned that Christ would be eating dinner, drops everything. Then goes where she surely knew she was not welcome, to a house of the ‘upper class’ and interrupts dinner. One can imagine, maybe, the desperation of the woman to subject herself to such humiliation. But that very humiliation and shame warrants Our Lord to provide his highest praise, most precious gift:

“Your faith has saved you; go in peace.”

What looks like ignominy, Christ reads as love. He is not kidding around- he really did and does- want to save sinners, you and me. It’s all paradox.