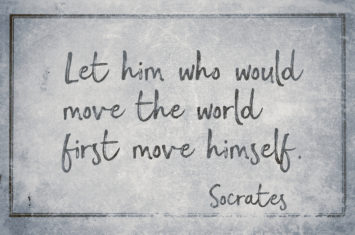 Know thyself: gnōthi seauton: These two words were inscribed in the vestibule of the Temple of Apollo in Delphi. They were the reason that Socrates disputed the declaration of the Oracle when she had named him as the wisest person on earth. When told what the Oracle had said, Socrates demurred, insisting that since he did not know himself, he could not be wise, never mind be the wisest on earth.

Before you answer that, think about the last time you did or said something that did not fit with the image you have of yourself- or want to have. And be honest.

A million years ago, as an undergrad, I fell in love with the idea behind the phrase, ‘know thyself’,  the love of wisdom personified by Socrates, Plato, Aristotle, in short, that ancient rarified Greek air. Rekindled when I made a trip there, alone, a few decades later.

Because I’ve started the next book, I, Claudia, those long dead people, and their ideas, have once again ignited. In order to write this new novel, being immersed in the cultures of ancient Rome and Greece is essential. Or I cannot write about the people.

Lest you be thinking along the lines of “That’s great, Lin, I’ll wait until you’ve written the book,” hold on. This will grab you. Promise.

He asks the same questions the ancient Greeks did. But formats them in the 21st-century academic language of behavioral economics. An iconoclast, Dan studies our facades, takes well established beliefs and blows them up. Like the one claiming that cheating, irrationality, and lying are done only by those lacking education and upbringing. Not pleasant to think about.

I say unpleasant because we’re often happy- sometimes ecstatic to read about the cheating, irrationality and lying done by others. But that’s not what Dan talks about. He’s after the lying, cheating and lying done by you and me.

Dan does TED talks: brief, gripping and provocative. He begins each one with the story of why he became interested in these subjects while a burn patient due to an explosion causing burns over 70% of his body. And his many failed attempts to persuade the burn nurses to change their method of dressing changes. A procedure that causes excruciating pain.

Isn’t it remarkable how one person can take tragedy and turn it into creative query? While another chooses the path of blame and victim-hood. But that’s fuel for another discussion, not here.

Here he talks about our ‘morally buggy’ behavior. It’s sixteen minutes long, and as promised, will grab you.

His talk moves on to cheating. Beginning with the famed Enron scandal, he wanted to study the problem of cheating-to discover just how pervasive is cheating.

“So think about what we find about dishonesty. What we find is it’s a struggle between two forces. You want to think of yourself as an honest, wonderful person on one hand and you want to gain from dishonesty on the other hand. And the way you can do it is to tell yourself a story about why this is actually okay. So ask yourself who can tell better stories? It turns out more creative people can tell better stories, so that’s actually what we find. We find it when we measure students that are more creative, they cheat more. We find that when we use priming to increase creativity, we also increase dishonesty. And when we went to an advertising agency, we also found that the people in the advertising agency who were in more creative job titles also had more flexibility.”

Now what do you think about Socrates’ rejection of the Oracle’s praise, Know Thyself?