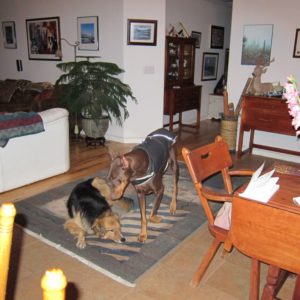 Only I and Shadow, the mostly black and gold mellow looking guy lying down on the floor next to the Doberman, witnessed Ally’s sudden death-it took less than ten seconds. I have deduced, after obsessively pondering everything that took place that night, as well as a few of the signs that had presented themselves for the previous few months in the Dobie, that Ally died of a lethal cardiac arrhythmia – most likely ventricular tachycardia which devolved into ventricular fibrillation. Coming up with an explanation doesn’t change anything but strangely, it helps. It has taken most of all of these six months for me to accept the Doberman’s fatal collapse; to focus on the gift of his presence for the few short years we had him.

We live in rural high desert country; a place where people can ‘drop off’ an unwanted puppy with no one the wiser. Shadow ‘adopted us’ when he was somewhere between six months to a year old; he was starving and the Vet was unable to place his age any more narrowly. It took him three days of hiding under the truck of the man who was building the white picket fence that would demarcate the landscaped section of our property during the day and at night, and then trying to find a place to hide from the mountain lions and coyotes during the nights to make the decision of accepting the haven we offered. To survive, the young dog had learned a most rudimentary set of skills: trust no one, expect mistreatment and when overwhelmed by fear and panic, run and hide, hoping not to be attacked.

It was painful to witness the stress imposed by Shadow’s inner battle to accept the food and water, trust the behavior of these people or revert to the running and hiding behaviors with which he had been imprinted. While the desire to find a place of safety, comfort; to take the risk was visibly tempting, his most likely reasonable distrust of people caused him to run after each tentative thrust of his nose through the newly built fence to accept my touch: the dilemma he faced audible in his cries and howls. But after three days and nights, he finally, one day, took the risk, shaking, shivering the fear and distrust distressingly evident as he came onto our porch to drink the water and food that had been offered for three days.

After many months of consistent care and love, this shivering, fear-filled animal transformed himself with the arrival of the new baby Doberman. From the very beginning of Ally’s arrival as a twenty-six pound puppy, Shadow knew he was now the Alpha and he rather miraculously donned the needed behaviors of the Alpha. The first indication of the transformation occurred when the Dobe was still very small and I was training him on the dirt road behind our house. Several times, the Rottweiler down the street would get out in the middle of the street almost daring me to walk past him with the puppy. I was always nervous, not knowing if the dog would attack me and the puppy. The first two times, I thought it a coincidence when the fifty pound Shadow would come out of nowhere and stand between us and the one hundred pound plus Rottweiler. By the third time, I knew it was no coincidence- although I could not see Shadow, he watched while I was out with his charge. Each time this happened, the huge Rottweiler backed off and retreated into his yard.

As the Dobe grew older, I felt comfortable with him hiking off leash; there were no cars to fear and I had been taught to bring food each time we hiked, teaching him that each time he came back, he would be rewarded with food and he loved his food. Until the day when a friend who happened to be staying with us asked if he could hike with the two dogs, that is. We had agreed to let him go alone with the dogs but when David returned in mid-afternoon without either dog, we realized the stupidity of our decision. Our mountains are home to many packs of coyotes and hungry mountain lions; we were very worried. Despite many searches in the neighborhood and back up the mountains, we found no sign of either dog. Until, at midnight, they appeared on the porch, panting, thirsty, exhausted and as happy as were we that they were home. I am convinced that the young Dobe had lost his way in the mountains, had somehow lost his four-footed guide and friend; mysteriously and miraculously Ally was found and led back home by Shadow.

When faced with the stresses of situations which remind us of lessons painfully learned in our early years we have the same choice as did my dog Shadow. The very best way to handle our own stresses is to do like Shadow did: Care so much about another being that we forget our fears and insecurities; we stop running and learn to risk again. Christ King of the Universe is The Apocalypse