So You Are A Logical Thinker? Really? 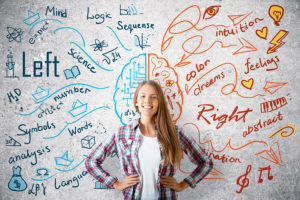 Bet you pride yourself on being a logical thinker. Most of do.

We’ve been schooled in Descarte’s Cogito Ergo Sum- I think therefore I am. The same Descartes who performed autopsies on live dogs, the euphemism vivisection sounds far more rational, doesn’t it? He claimed that their screams were merely neurological responses by non-rational organisms who could feel no pain.

Remarkable, isn’t it? The power we cede others to shape our view of reality and our world? Don’t be too hard on Renee however, after all, he lived during the phase of human development called the Enlightenment. The dawn of man’s self-deification.

Descartes would be stunned to learn the truth about the animals he tortured, if he were capable of accepting the breadth of his ignorance and cruelty.

Years ago, while working on my doctorate, I became intrigued by decision making. I worked in academic medicine, with physicians who were ostensibly the at the top of the heap of rationality and should be the quintessence of reason. My experience with physicians was different; they were a group who appeared no more, at times far less reasonable than non-physicians. And frequently, their decisions were based on emotion rather than data.

The administrators whom I worked for were the same, driven more by emotion than by the data we all drowned in. Therefore, when my dissertation advisor found the Nobel Prize winning Garbage Can Model of Decision-Making, I was ecstatic. The researchers confirmed my increasing suspicion that the notion of even the most highly educated of us rely on reason for our decisions was bogus.

During the years of study and later the writing of my dissertation, I came across one of the major current voices in decision theory: 83 year old Israeli psychologist Daniel Kahnaman. When you spend hours and hours with minds like his, they become friends. And when I see him interviewed by Krista Tippett, I smile at his responses to her questions. Wisdom, there’s no substitute for it, is there?

Mr. Kahneman: It is not, because you do not appear rational to them. And the fact that arguments that feel irrefutable come to our mind so easily doesn’t mean that those arguments are the real cause of our beliefs and doesn’t mean much of anything about the validity of the argument. The way that the mind works, very frequently, is that we start from a decision, or we start from a belief, and then the stories that explain it come to our mind. And the sequence that we have when we think about thinking, that arguments come first and conclusions come later, that sequence is often reversed. Conclusions come first, and rationalizations come later.

Ms. Tippett: But isn’t it interesting that the discipline — or, at least, the idealized discipline of politics or political science, the way we think you have a debate, and then, somehow, the best idea will appear right to everyone [laughs] — and that’s not, in fact, the way — as you’re saying, that’s not even the way our brains work.

Mr. Kahneman: Absolutely. I mean certainly, what is happening in the United States in the last six months is — it’s really a testimony to that sort of process. You have people on the left, probably — possibly the majority of the country, certainly the people that Donald Trump calls “elites” — and they cannot believe what they see in the polls every week, which is that behaviors that appear to them to be crazy have absolutely no effect on the popularity of the president among a group of his supporters. You read The New York Times, and you feel that everybody who writes there cannot make their peace with the fact that the support is stable, in spite of things that strike them as —

Mr. Kahneman: Absolutely. “Why don’t they change their mind?” And the reason they don’t change their mind is that facts don’t matter, or they matter much less than people think. And people on both sides believe that there are facts that support them. But those beliefs should not be taken too seriously.