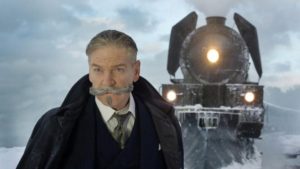 A masterpiece by Kenneth Branagh and Patrick Doyle is a redundant statement. Since their first and brilliant 1989 film, Henry V, I have been an enthusiastic, even rabid fan of these two men. The film was based on Shakespeare’s play about the young English king, Henry V’s miraculous win at the battle of Agincourt. Impossibly outnumbered by the French, the young king leads his exhausted soldiers to a miraculous win, ending the Hundred Years War.

Don’t worry, I’ll get to Murder on the Orient Express. Just permit me to explain-briefly- why I became hooked by the collaboration between Kenneth Branagh and Patrick Doyle back in the late eighties. One that produces gems.

They were irresistible to me: This not yet thirty-year-old Brit and his wife who wanted to make Shakespeare accessible to the world. To smash the notion that Shakespeare was elitist reading and required scholarly interpretation in order to be appreciated by ordinary people. Kenneth Branagh and Emma Thompson had audacious , even perhaps, big hairy audacious goals. And who introduced to the world stage, composer Patrick Doyle.

At the time the movie was released, I was studying for my qualifying exams. Working full-time and on-track to finish my doctorate. If you’ve been there, you remember the time you don’t have, the weekends and vacations where all you do is study. To the annoyance of your friends and family. And it feels like it will never end. Until suddenly, you face three full days of exams. What if I don’t pass? After all the years of studying, what if I flunk these final exams?

It feels as if your very life is on the line. It’s not, of course, but it feels like it. Therefore, listening to Patrick Doyle’s background music to Kenneth Branagh’s astounding St. Crispin Day speech was not just ennobling, it crept inside my heart and psyche. And stayed there. I bought the soundtrack and played it as I drove to each of those seemingly endless exam days…I can do this…I can do this.

….This story shall the good man teach his son;
And Crispin Crispian shall ne’er go by,
From this day to the ending of the world,
But we in it shall be remember’d;
We few, we happy few, we band of brothers;
For he to-day that sheds his blood with me
Shall be my brother; be he ne’er so vile,
This day shall gentle his condition:
And gentlemen in England now a-bed
Shall think themselves accursed they were not here,
And hold their manhoods cheap whiles any speaks
That fought with us upon Saint Crispin’s day.

Therefore, I expected to enjoy Murder on the Orient Express, a whole lot. Since it’s been a while since I’ve been exposed to the mastery of these two, those expectations were eclipsed by wide margins. Masterpieces aren’t that common, after all.

I had never read Agatha Christie’s first novel. Or any of her books, for that matter. Therefore, I knew nothing about the plot or the characters. Only that she is the author who brought mystery fiction into the living rooms of the world. The master of the whodunit.

You know most of the cast: Willem Dafoe, Johnny Depp, Michelle Pfeiffer, Judy Dench, Penelope Cruz. The dialogue is splendid- filled with pithy comments from Poirot like these:

“I can only see a world as it should be.  It makes an imperfection stick out like the nose on your face.”

“I detect criminals.  I do not protect them.”

And heartbreaking ones: “Crime is an anomaly.  Murder is a fracture of the soul.”

Once again, Branagh both directs and stars in the film. And Patrick Doyle’s score claims our attention from the very first scene at the Wailing Wall in Jerusalem. Doyle’s compositions magnificently underscore the unfolding and unbearable poignancy of the story in Justice. And peaks with a piece which is too easy to miss because it plays during the credits as everyone leaves the theater. A female voice sings a heart rending song. Kenneth Branagh and Patrick Doyle persuaded a reluctant Michelle Pfieiffer to sing Never Forget