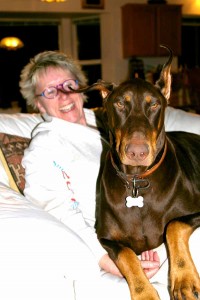 Remember the song from Annie, I Don’t Need Anything But You“: ‘Yesterday was plain awful and Daddy Warbucks sings back: ‘You can say that again’ and she does?

It’s been 3 weeks tonight since I saw my Dobie boy drop dead and I really thought I had accepted that he was gone…could focus on the joy this boy brought into our then 4 creature family-the great memories of  long hikes in the mountains behind our house with my 2 four footed boys, being ever so grateful that his heart did not stop out there in the wilderness where I would never have found him.

But then I saw Rachel’s email, with the subject line, ‘It came to me’.

“I lose a part of my heart with the loss of each dog. And when my next dog gifts me with a piece of his heart, I know that another piece of my heart will be buried with him when he dies. Maybe someday my heart will be transformed into these pieces- these gifts- and finally create a heart filled only with generosity and love, like that of a dog.”

And I began to cry…for the millionth time

About 4 years ago complications from a surgery forced us to keep Ally, our Doberman at the hospital, practically immobile in a kennel barely large enough for him to stand. My husband John brought a 4 inch stuffed  heart to Ally, knowing how he loved his stuffed animals. Until his death, Ally treasured that heart; several times a month he would bring it over to John and stare at him with his uniquely Ally gaze  with the heart in his mouth. Mere words could never  convey the gratitude of that dog to that man for the gift; its memory and  meaning.

That heart now rests against the stone marking Ally’s grave.

Rachel’s words have answered my questions about  the intensity of my grief, the haunting sense that it is out of proportion when weighed against so many more terrible losses of humans in this world…embarrassment at the knowledge that the loss of my dogs has hurt more deeply than has the deaths of members of my family.

Rachel is the Mom of 2 young boys, the wife of a busy husband who travels all over the world while she home schools her 5 and 10 year old sons.  In early January, she emailed me with a simple “Rest in peace, Houdini” to let me know that their 15 year old Australian Shepherd had died. Foolishly, I assumed that she had moved on with her busy life…after all, she and Dan knew that the dog was practically deaf and was sleeping more and more. They were expecting that they would lose Houdini…it was time.

But then I received my friend Rachel’s dog Houdini died early yesterday morning.

When I read her words to me yesterday, and as I write about them now, I realize the absurdity of any attempt to place a time limit or a metric on her grief or my own…but more…much more, I realize the truth of the words from this busy wife and Mom about the death of her beloved Houdini.

I thank you for your words Rachel;they are wise—profound, really:

The  innocent and unsullied love of a dog is pure gift for the time we are graced with it and when it is gone, our bleeding hearts are stretched; our capacity for love far, far greater now. The deaths of our dogs  teach us and the lessons are visceral…radical. We become more than we were.