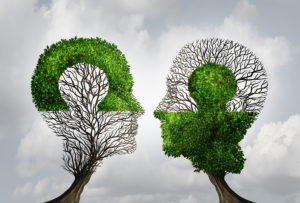 Perfect business partnership as a connecting puzzle shaped as two trees in the form of human heads connecting together to complete each other as a corporate success metaphor for cooperation and agreement as equal partners. Two different entities, that is how fiction and non-fiction have seemed to me. Ever since I began to write fiction, I have spoken and written frequently about how wholly different is that process from non-fiction. Until this week when suddenly I realized how wrong I’ve been.

Maybe you’ve never spent much time pondering this subject. But I’ll bet you’ve had experiences where something you perceived as one thing revealed itself as something else entirely. Like maybe thinking President Trump was an inane idiot and then realizing he’s the best President we’ve ever had. Well, maybe not quite that momentous a shift in thinking but I did succeed in getting your attention, right?

“So Lin, why have you decided that writing fiction and non-fiction are two sides of the same coin?”

Thanks for asking because it’s such a kick to look at a tired old opinion and realize it was wrong. I had an opportunity to write a guest post for a site that markets authors. Along with an author interview they posted last week, this new guest post could potentially bring new interest in my books. After scanning some of the other posts on the seriousreading.com,site along with reviewing some of the questions I had answered in the author interview, I decided to write an article called, Fiction vs. Non-Fiction: A Fading Distinction.

Here’s the beginning of that article:

Until I replied to a question in a recent author interview, I considered my process of writing fiction with that of writing non-fiction as wholly different, residing on different planets, even universes. Non-fiction, I stated frequently, is far easier writing than is a novel. But after responding to a recent author interview question, “What kind of research do you do, and how long do you spend researching before beginning a book?”, my opinion has changed. And radically so.  Now I see fiction and non-fiction as two sides of the same coin: Superficially, they appear very different but substantially are identical.

There are three primary reasons I no longer see the distinction I once did. But first, some background about my life-long love of writing.

Like many ambitious career-minded doctors, lawyers, business people, I published extensively in my field. Although not expected in my job, the lengthy list of publications augmented my credibility within the institution as well as in the minds of recruiters searching for new senior executives. Consequently, writing became a way of life. Back in my all-consuming career in academic medicine, all of it was done on weekends and vacations.

WHY WOULD ANYONE CHOOSE TO SPEND PRECIOUS ‘OFF’ TIME WRITING INSTEAD OF RELAXING AND ‘ENJOYING LIFE?” A CHIEF, ADMITTEDLY UNCOMPLIMENTARY, REASON WAS THAT I LIKED SEEING MY NAME IN PRINT MAGAZINES, BOOKS, AND OTHER PROFESSIONAL TRADE PUBLICATIONS. BUT MORE THAN THAT, I LEARNED THAT THE BEST WAY FOR ME TO KNOW WHAT I THINK ABOUT A COMPLEX OR CONTROVERSIAL SUBJECT WAS TO WRITE AND PUBLISH MY THOUGHTS. WHILE IT IS ONE THING EXPRESSING AN AD-LIB OPINION ABOUT A KNOTTY SUBJECT VERBALLY, IT IS QUITE ANOTHER TO TACKLE IT AND WRITE A PRINTED PIECE ON THE MATTER. DURING THE PROCESS OF PONDERING AND RESEARCHING THE THING, ONE MIGHT FIND THAT SHE HAS CHANGED HER MIND. WHOLLY.

If you’d like to read the entire article, here it is.