Our Culture of Superlatives: Do Our Words Matter? 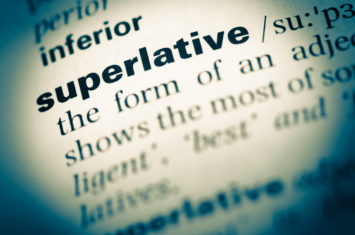 Close up of old English dictionary page with word superlative

What does that mean, exactly? Recently, I’ve become aware of my tendency to use superlatives both in my writing and in speaking. Consequently, I’ve been thinking a lot about word selection, both mine and that of others.

The fourth in the Lindsey McCall medical mystery series, Malthus Revisited: The Cup of Wrath is done. And is currently being read and edited by five, soon to be six people. Always a humbling and often tedious process. No longer a novice at writing fiction, I’ve learned to reign in my use of unnecessary words, often, but not always, adjectives. Usually, superlatives. They jump out to a careful reader like my husband John.

Which leads to the second part of the thought, ‘do our words matter?’

A few months ago, I decided to stop using the word awesome. Mostly because I was using it without thinking. Applying a word meaning inspiration of an overwhelming reverence, admiration or fear to a good meal or movie feels trite, even disrespectful. But it’s become habit, has snuck unbidden into my thoughts. Therefore, out my mouth.

Many years ago, nearing my graduation from college, the head of the English Department at the college and I were talking about communication. I had expected that the degree in English would confer automatically, effective communication- with anyone. Dismayed at the fallacy of my hope, I’d gone to speak with her. I had learned the ease with which my words could be misunderstood, even used against me.

remains, all these years later, the quintessence of an educator.

Her thoughts and viewpoints far beyond her time, Sr. Marie Bernard was fascinated by the power of the vernacular upon those who lived and spoke it. And her admonitions to her students were simple and practical: while the meaning of a word may be clear and precise to you as a writer or a speaker, understand always, there are those in the listening or reading audience to whom the meaning of that word may be something else entirely.

So many years later, I remember gratefully the time I spent with her. Lessons taught by a woman who belied her stiff, starched black and white appearance of her Dominican  habit. Instead, she took real delight in understanding the nuances of language adopted by people living in a particular time and place. She understood that language is alive, constantly changing. And yet, insisted on precise, careful writing from her English major students. Always the paradox.