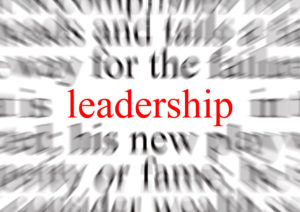 blurred text with a focus on leadership Leadership. Thousands-maybe hundreds of thousands, of books and articles have been written about it. Still the questions abound.

Despite the conflicting opinions about the genesis of the leader or whether leadership behaviors can be taught and learned, we know it when we see it. Sometimes we recognize leadership in a person because it seems to cloak, even define, him.

I’d never heard of Stanley McChrystal until that famed Rolling Stone article back in 2010. If you missed it, here are a few sentences that may remind you of the Army Ranger turned general’s brief command of American forces in Afghanistan.

“The general prides himself on being sharper and ballsier than anyone else, but his brashness comes with a price: Although McChrystal has been in charge of the war for only a year, in that short time he has managed to piss off almost everyone with a stake in the conflict. Last fall, during the question-and-answer session following a speech he gave in London, McChrystal dismissed the counterterrorism strategy being advocated by Vice President Joe Biden as “shortsighted,” saying it would lead to a state of “Chaos-istan.” The remarks earned him a smackdown from the president himself, who summoned the general to a terse private meeting aboard Air Force One. The message to McChrystal seemed clear: Shut the fuck up, and keep a lower profile”

I have a love/hate relationship with leadership and all that it implies. I loved the challenges, the crises, the constant learning. Most of all, I loved working with smart people. And I loved the institution of academic medicine–or rather my idealized concept of it.

But hated the games…the politics. And was frequently surprised that I didn’t get fired… until finally, I did. Consequently, I remain fascinated by both the presence and more commonly, absence of leadership.

When I read Michael Hastings’ article ‘The Runaway General’, this guy McChrystal made me laugh: the attitude was familiar…brought back many fond memories. Eight years later, he still does.

Here’s a recent Ted Talk by the now retired Brigadier General on 9/11, Afghanistan and his thoughts on leadership. I hope you enjoy the seventeen minutes with Stanley McChrystal as much as I did. He tells us that he made a parachute jump on September 11, 2001. That while he and the group of young Army Rangers he was training were falling back to ground, the earth they landed on had forever changed.

It’s good to know that the man still breathes the same air that we do. Still challenging. provoking, pushing the boundaries.