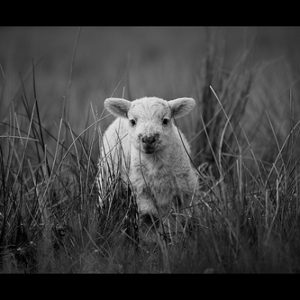 On this Feast of the Good Shepherd, I think of a hike I took up in the mountains behind our home here in the high desert about two years ago.

The lone lamb suddenly appeared in the brush and then raced  into the high desert running as fast as she could, both  dogs close to her heels. Startled and worried, I began to holler for the dogs to return for I thought that the huge herd of sheep must still be up in the mountains where the dogs and I hike several times per week. Unless the shepherd is up there with his several- hundred sheep.

When we first moved here, we were warned about the perils of chasing sheep or cattle, our dogs could justifiably be shot in this open pasture country of the high sierras.

Having finally corralled the dogs and descending back down as rapidly as I could, I relaxed when I saw the shepherd driving the truck back up to his former campsite to retrieve his tiny RV and drive it to the new destination of the herd.

He stopped only because I was standing in the middle of the dirt road and he could not drive around me, the road is too narrow.

Reluctantly, he rolled down the window of his truck.

These shepherds are usually from Peru or Ecuador and speak very little English, so I knew to use short phrases and gestures about the lost sheep, pointing  to the Border Collie standing in the back of the truck.

I told him about the lamb, where I had seen her, that she’d led my dogs away from the grasses of the stream and asked that he and his dog please find her.

“She has a baby” was all he said to my increasingly desperate attempts to persuade him to rescue her.

Finally, I gave up, nodding as if I understood.

I kept thinking of that lamb, alone up there, surrounded by all kinds of predators, wondering how she could survive the night, amidst  hoardes of hungry coyotes, bears and mountain lions looking for food to feed their young.

I have since learned that when one of the herd gives birth to a baby, the ewe has a choice: to abandon the baby and travel with the herd or to stay with the baby, the herd travels too fast for an infant lamb to keep up.

Sheep are known to be fearful, in fact, I have been told that they can die of fright; their need to part of the herd is deep and powerful. And yet this female chose isolation in dangerous territory over abandoning her baby; moreover, she successfully diverted the attention of my dogs to lure them away from her baby. This was not the image I have ever been taught about sheep: courageous, defenseless, but willing to fight to risk her life for that of her baby.

Christ must have known this behavior well. In those mostly silent thirty years of His life with Mary, He must have understood the obligations of the shepherd, witnessed their actions and seen first-hand the choices that had to me made for the sake of the entire herd. Christ knew the psalms, most likely had memorized them. Therefore, our  Lord also understood that the notion of a peaceful, meek shepherd is a fiction. In the mountains of the world, these men must be prepared to fight off predators. Consider David’s response to Saul when the King doubted his strength and courage. The boy was, after all, a ‘mere shepherd’.

Thy servant kept his father’s herds at pasture and often a lion or bear came and snatched a lamb from the midst of it; and I went out after him and struck him, and took the animal from his mouth.

Indeed, He must also have appreciated the practicalities of the lone man entrusted with the lives of eight-hundred or two-thousand sheep. Knew that the shepherd has no choice but to leave behind the female who chooses to stay with her brand new baby lamb. Knowing this then, His words to us on this Feast of the Good Shepherd, are worthy of wonder and offer us profound consolation despite our fears, our illness, our doubts:

Christ, the Good Shepherd, does what he understands is not possible. He leaves his flock to go in search of the one who has strayed, perhaps the new mother who has stayed to protect her infant.

Suppose one of you had a hundred sheep and lost one. Wouldn’t you leave the ninety-nine in the wilderness and go after the lost one until you found it? When found, you can be sure you would put it across your shoulders, rejoicing, and when you got home call in your friends and neighbors, saying, ‘Celebrate with me! I’ve found my lost sheep!’

Be not afraid, I am with you until the end of time.