What Is It About Dogs? 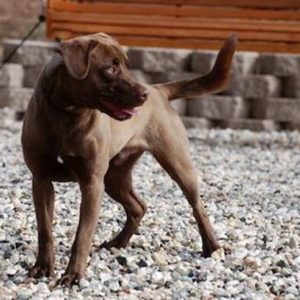 What is it it about dogs?

Some call it the ‘cute factor’, others talk about the unconditional nature of their love, while still others maintain that their dog (s) is the best friend they have ever had. A recent survey reveals that many of us spend more for our dogs health care than on our own. The benefits of being owned by a dog are extensive. In fact, one survey reveals that ninety-three per cent of us believe their dogs have made them better people.

But then there is the dark side: the abandoned dogs.

If you have been reading these posts for any time at all then you know that I am addicted to Dobermans. Each of my books features at least one Dobie boy. The latest one costars three Dobes. So then why, when following my husband John into the Reno Petco this past Saturday morning, did I fall in love with Seymour, a chocolate lab mix? And beg John to let us take him home so that we can become a pack of four once again?

Once I could stop crying long enough to focus on dog web sites following the sudden death of my beloved Doberman, I began to lurk on rescue sites. Mostly Doberman rescue sites but sometimes all dogs rescue sites.

Over fourteen months later, I look at these abandoned dogs

in much the same way as I do homeless people. Fully aware that some may find the statement offensive, I say it anyway. Here’s why.

For a number of years, my husband and I worked with several homeless agencies in Reno.

And learned from many of the homeless themselves that many prefer the street to the shelters for a variety of reasons. And heard that it was almost impossible to be hungry in Reno. There were too many churches and agencies intent on assuring that no one who wants to eat will go hungry.

Like all huge subjects, that of homelessness is complex. But my experience with those who run the shelters and conversations with some  homeless men revealed a fact that we like to overlook politically and culturally. Many people who live on the street do so because they want their drugs and or their alcohol. The shelters do not allow drugs or alcohol ergo these people choose the street.

These dogs have no such options.

They are bred, frequently over bred or adopted because of the cute factor and then abandoned because of a myriad of reasons. Each one tears out the heart and stomps on it. Reasons like these: “We moved.” “He got too old.” “We don’t have time for him.” And on and on. I decided that I could no longer take a new puppy into our home, it feels morally wrong- even an adorable Dobie boy.

Over time I began to donate money to mostly Dobie rescue sites. Especially Ardis Braun’s Dobies and Little Paws in southern California.And then to open up my heart to any of the wide variety of these amazing creatures who are in desperate need of a forever home. So this morning, when my husband said I could call to see if Seymour is still available, I jumped on it. I am waiting to hear back but it is Sunday so maybe I’ll not get a call until tomorrow, Monday.

Seymour looks nothing like my beloved Dobie. In fact, he is close to a polar opposite of the elegant, lean long-legged Doberman. He is stocky with short legs, a chunky torso and floppy ears. If he does join our pack, this one dog leaves many hundreds of thousands of deserving dogs looking for a home. But if more of us look at adopting we can empty these shelters. Maybe.

A PS: Seymour has joined our pack. And for those of you considering a rescue dog, here is the Ultimate Guide to Pet Adoption.