Writing- Why Do We Do It? 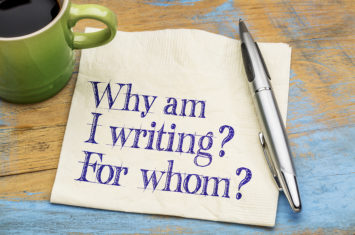 Why am I writing? For whom? - Writer or author questions on a napkin with a cup of coffee Writing- why do we do it?

Writing- why do we do it?

The first draft of my fourth novel is done. And is now with the editor. I have time now, time I’ve not had for many months. A break until the work of revisions begins again.

Reflecting about writing- why do we do it? works for this week’s post because increasingly it feels like everyone has, or wants to, written a book. No big surprise as many of the former obstacles to writing and publishing a book are gone. More and more frequently, new or aspiring authors ask for a review or explain how to find a literary agent.

We all have stories to tell. For some of us, the lure of flinging them into the public sphere is irresistible.

If we search online for that phrase, writing- why do we do it? [or some variation of it] pages and pages of hits will appear. Many authors have spent time ruminating about why they decided to enter this wild and wacky world of writing fiction. The replies are as varied as are the writers.

A personal favorite is Lord Byron’s, “If I don’t write to empty my mind, I go mad.” His remark makes me smile because of the deceptively simple truth reflected there. At times, the story and characters fight to get out. Sometimes leaving open wounds behind.

There are the obvious reasons why we write:

Each of these is important but none of these come close to the fundamental reason for struggling with stories, characters and coherent plots in which to embed imaginary people. Until we can say, enough.

Here are my 3 replies to the question, writing, why do we do it? Maybe these are true for you as well. Or could be.

We cannot not write.

A double negative, I know but there’s no better way to say it. If the best way to learn about a thing is to teach it, then the best way to know what we really think is to write. For most of us, the story creates a fire in our belly. Characters which are so compelling that we must write them into existence.  Once that happens, not infrequently, we get help. Like a very tall, well-built, buzz-haired man at church a few years ago. Obviously a Marine. When he walked in, I thought, that’s Gabe McAllister!, a character introduced in the second novel.

Or thoughts about something heard or read which won’t go away until fully explored. In written words. Words which are read, rewritten, then read, then rewritten. Until finally, close enough! Let it go.

The sheer love of the work.

It’s a calling, I think. Calling is such an intriguing word because it implies reciprocity. If there is such a thing as a calling, then there must be a Caller.

Expressing what we love-and fear…through our characters.

Writing a series of medical mystery novels was not something I planned. But then the best things in my life have either been someone else’s idea or an unplanned surprise.

For much of my life, I wrote and published non-fiction. Less demanding writing I think but also more restrictive. Mostly because the non-fiction writer is wholly in control of the content. Not so with fiction.

The four Dr. Lindsey McCall stories have immersed me in a number of subjects I’d never have been all that interested in had the characters not called me to them.

The list is a long one. But just a sampling includes wrongful convictions for murder and sexual abuse, epigenetics, Bosnian war and chemical warfare.

Fictional characters permit airing of closely held beliefs. But carefully, subtly. No one enjoys the bully pulpit of another. Of all the critical reviews I’ve received (there is a long list) none has stated that the allusions to faith, the Catholic Church and religion are among the reasons they disliked the book, or parts of it. That’s been a pleasant surprise.

When speaking to a group about  writing, why do we do it?, my good friend Rebecca remarked that the fiction writer is compelled to explore unpleasant, even abhorrent acts or attitudes in the process of creating her story. That work- and it can be painful, stretches the heart and psyche of the writer such that the most heinous of human behavior can be …understood. Even forgiven.

In the book about to be released, Malthus Revisited: The Cup of Wrath, I found myself thinking about her words. A main character in the story is filled with hatred- for all of humanity. I had to imagine just how that could happen…Dr. Viktor Dragovik wasn’t born to hate. How could it have happened?

Thanks for reading my thoughts on writing, why do we do it?